I’m still going through the missing files I have to replace. The logo I’m posting today is the one I used as a solo rapper. A.B. Do Well was the name I went by, and occasionally still use when in the company of those that remember and respect the name. Not a huge group of people, but definitely a sincere group. The name A.B. Do Well was a combination of things, it was a play on my actual name and a mission statement. A.B. is Abdul-Baqi, the name my mother gave me. It’s Arabic and Islamic, Al-Baqi is one of the 99 attributes of Allah, it means The Eternal/Enduring. Abdul is a title in arabic meaning (devout) servant or slave of God. So my first name translates to The Servant of the Eternal (God). Do Well is my intention and/or practice of making sure I put my best into all of my endeavors. Whatever I do the goal is to do it well. A.B. Do Well when pronounced all together sounds an awful lot like Abdul. That was the thought process behind the stage name way back when I was 19 or 20.

As for the logo I was keeping with the esoteric/mystical theme from the group Sight Beyond Light. For that I took the initials from the group name, SBL, and fashioned them into the All Seeing Eye, which is usually associated with the Eye of Horus and typically is a symbol for the sun. It also alludes to the Third Eye, which is a symbol for higher understanding and enlightenment.  For A.B. Do Well I borrowed the symbol of the Masons, a very widely known fraternal order that is for some reason considered a secret society. Their symbol is the compass and the square, tools for designing and architecture. The roots of the Masons is in building, generally with stones. But the compass and the square to me represent taking the long view and exercising proper and precise planning to achieve wondrous and dynamic goals that leave an indelible mark on society.  That’s a great symbol and philosophy to adopt. A but lofty, but if you don’t dream big, you don’t achieve big. Anyway, here’s a pic of the recreated A.B. Do Well logo.

Nice and simple, but I didn’t use the square because I was saying I had a more rounded view. YOu know how it is, you think you know everything at 20. More than people that have been around long enough to know better. More than ancient orders that have had centuries to think and plan. But like I said, lofty.

I was thinking this is a little to basic and played around with a nice new image based on a more modern logo for the Masons. 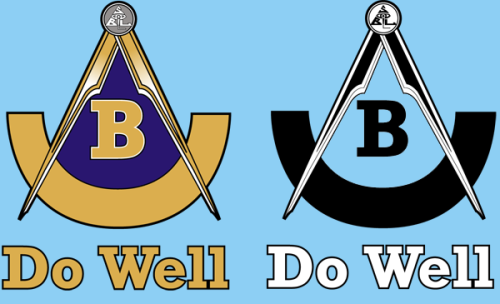 I kind of wish I played around more with the logo when I first created it. I’m really liking the update. I guess I have an excuse to start rapping again. This logo shows some growth and refinement. Pretty slick.

Well I’m sure I’ll have another lost logo up soon. Until then, Peace, be well and Do Well.