I’m a frequent volunteer at MoCCA, the Museum of Comic and Cartoon Art, located in the SOHO neighborhood of New York City. It’s a nice place to look at some original artwork from some of the greats in the Comic Book and Animation fields. The museum helps legitimize the art forms and gives enthusiasts a more high brow place to gather than the local comic book shop. I also attend the Big City Dare2Draw pretty regularly too, The Dare2Draw is interesting in that comic book artists gather to sketch models in action poses, and network. There is usually an informative panel discussion as well, with professionals giving their insight on the industry. Last night I participated in both events at the same time and it was pretty fantastic.

The Dare2Draw was held at MoCCA and I was there as a volunteer, setting up, moving walls and museum fixtures and more interestingly handling original artwork from Bob Kane the creator of Batman, Neal Adams one of the most brilliant artists in the industry, and the work of other artists that have been instrumental in the telling of Batman’s story since 1939. The pieces were delicately handled as the gallery space was moved so we could make room for all the artists to get a good view of the models.

The guests didn’t get to see the back breaking set-up, but here’s the view they did get.

The Museum got pretty full and it was just about time to get some figure drawing in. But before that Dare2Draw host, TJ Glenn, The Urban Swashbuckler, welcomed the artists to the event and made some announcements about future events and introduced the panelists and other special guests, including famed DC Comics artist, Kyle Baker. Baker, the seated gentleman taking off his jacket, is known for his work on the all ages Plastic Man series, and his gritty Hawkman segment in Wednesday Comics. 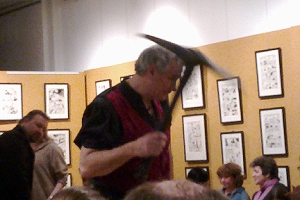 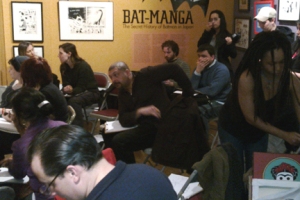 When the models arrived I stopped taking photos and started sketching. The figure drawing exercise is broken down into 3 secgments, the first is a series of ten poses with a two-minute duration, followed by four 5-minute poses and concluding with two 10-minute poses. I’m not showing all of the sketches, but here are a few of mine. 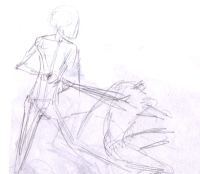 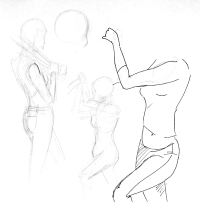 All in all it was a good time, even with the heavy lifting that followed the event. We had to move the walls back into place and store some dusty metal planks. But, you know when you can’t be philanthropical with money, do it with time and muscles. The next Dare2Draw is March 28. 2012 held at Different Directions at 417 West 57th St. MoCCA’s gallery hours are 12:00Pm until 5:00PM, Tuesday through Sunday. The MoCCA Art Festival is takes place April 28-29 at the 69th Regiment Armory, 68 Lexington Avenue, New York, NY.

Check their websites for upcoming events.