In my boneheadedness, I believed I was recording into a SHURE SM-57 mic through a Digidesign MBox 2 Pro for the last few months. That was not the case, at all, I was recording into my computers built in mic. That’s ok for skype and taking notes, but, I’m trying to have vocals that start strong. So, I downloaded the driver for it and that changed things quite a bit. Anyway, now that I squared that away I laid out this track that I was performing as an opener, when I used to perform. So, here we go. It’s called, “What Up Y’all? (It’s A.B.)”I recorded a song called “Franklin Richards” over  the track by sTERRYo aka Soem aka TK Lawrence of Sight Beyond Light, the Dub Pistols and the Hardy Boys.  The track is lost to time, but hopefully when I repurposed the beat I created a timeless track.

I also came up with some artwork for it based on the “Keep Calm and Carry On.” posters that were really popular 3 years ago. 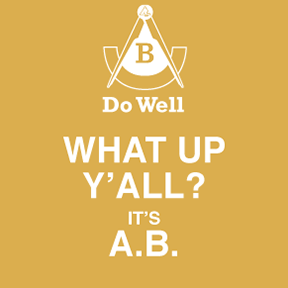 P & Q Video and Back Story

I made a bunch of iMovie videos for some of my old songs to put on Youtube a few months back. They’re on my video page here, if you haven’t seen ’em check ’em out, they’re fun low budget takes on the songs I barely had money to record.

But anyways, I fully intended to make one for P & Q back then too. The chorus talked about  the if P then Q theory of logic learned in basic algebra, or Sequential One,and I wanted to use the text book Sub-Conscious and I used when we were in high school. A book pretty much every high school student in New York City used since the late 80s. Integrated Mathematics, Course I. I couldn’t find an image for the book online for the life of me, but mysteriously I found it yesterday. I only looked for it because my friend Rah Unique (@rah_unique) tweeted that he was now playing the song using the hash tag #NP, and he shouted me out @countbaqula. So, I found it and it’s very low resolution, but it was enough to make a mock book cover for the song.

I took this and made this: 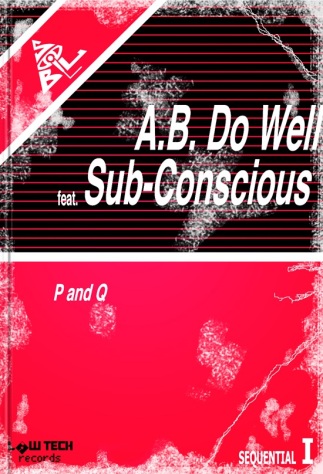 I may have gone a little to crazy trying to distress and age the book, but I was a man possessed. I was so happy to finally get a basic image that I played around with it for hours. After making the cover it was time to go ahead and make the video. And there it is below, for you viewing pleasure.

Not much to say here, this was the logo I came up with for Low Tech Records,the indie record label my rap group, Sight Beyond Light. We used it to press up our first single, New Beginning b/w Illusions; that I  spoke about in the last post, and a few other projects. Sub-Conscious released his first full length album, Lyric Lovers Deluxe, on Low Tech Records. I made a little promo album for Sight Beyond Light titled Vanishing Point of View and later pressed up A.B. Conversations, my solo project as A.B. Do Well that was sold hand-to-hand for the most part. I put a few up on CD-Baby, but like only a few I also had some up at a few digital retailers, they’re now closed though. But I still have a Myspace page up as A.B. Do Well. I don’t look at that page much, but you can.

So I think I’ll tackle the A.B. Do Well logo next time around. See you then, if not sooner. I’ve been working on on pages for The Stunning Beeboy and set up a different site for a web-comic. I know you all are on pins and needles, anxiously awaiting his debut, don’t worry he’ll bee here soon.(see what I did there?)

Well a while ago my external hard drive said I over worked it and just straight up quit on me. No two weeks notice or anything, super inconsiderate. But when it left it took all the old files I had on it, including the vector file of the logo for my former rap group, Sight Beyond Light. I waited a long time to recreate the image, but I finally did. I also through in the way it was laid out for the first single on Low Tech Records, our super unofficial record label. I mean the music was official, we just never registered it as a business. But that was in 2000.

Anyway, here’s the sticker/artwork for the first single. DJ Eclipse from Fat Beats and NYU Radios Hip-Hop Show, Halftime Radio, was super impressed with the professional presentation. I can’t take all the credit though, my band mate Blu Jemz(formerly JMS Inja) offered his input about the color scheme. Man those were the good old days. The four man crew was A.B. Do Well, that’s what I used to go by , Blu Jemz, Soem(he now goes by sTERRYo), and Sub-Conscious. We would be in the lab constantly. Soem and Blu Jemz made the beats for the most part, but our boys Rio Murray, Omari Toomer and Jon Abrahams also through their sound into the mix. Omari would lend vocals from time to time as well. Enough reminiscing, here’s the logo in question.

The all seeing eye, again I can’t take full credit at all because my brother came up with the initial sketch. I just vectorized it in Adobe Illustrator. Anyway here’s a little video I made for it way after the fact.

Also, I always wanted to go all Dark Side of the Moon with the logo, but other members of the band thought it was corny to rip off the Pink FLoyd album cover. I thought it would be so fitting and cool and at the time I’d just seen the Wizard of Oz Set to that album. There were moments when the synch up worked to amazing effect, but those moments were few and far between. Anyways, here’s my homage.

Well that’s one design file down. I don’t even want to guess how many there are to go, but I suppose the logo for the label is a must. I loved that old Low Tech Logo. Maybe I’ll have it up soon.