This is from Round 4  of Comic Book Resources Project CBRunway. The theme for the week was John Hughes’ classic teen film from the 80s,”The Breakfast Club.”

We had to make the archetypical characters, the Brain, The Princess, The Basket-case, the Jock and the Criminal, into Super Heros. After selecting a number between one and five I was assigned the Jock,  Andrew Clark, played by Emilio Estevez. The character he played was an athlete on the wrestling team in detention because he duct taped some poor saps butt cheeks together. 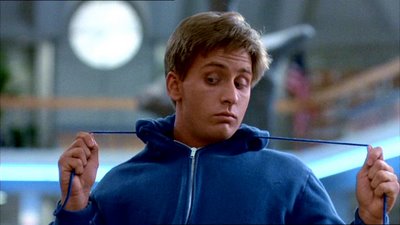 He looks capable of juvenile evil.

So my approach was to give him the basic super hero strongman look and add a few touches from the movie. He has typical wrestling gear, a mask and his varsity jacket from the film. Here’s the inked drawing. 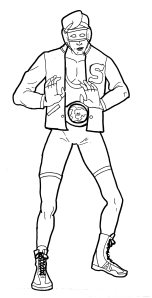 And the final colored image.

As the Gym Class Hero, Andrew Clark dons his varsity jacket and wrestling uniform to take down the bullies and creeps at Shermer High School redeeming himself for having once been a locker room bully. He asked the “Brain” to soak his costume in “chemical X” to make them more durable, the treads on his wrestling boots are reenforced with a metallic rubber to help him keep his ground and his mask is worn under his headgear, because it looks a little less silly that way. His belt is a novelty belt he got on line, a replica of the championship belt from his favorite pro wrestling company and his fingerless gloves are padded to protect his knuckles, and not leave bruises on wrongdoers.